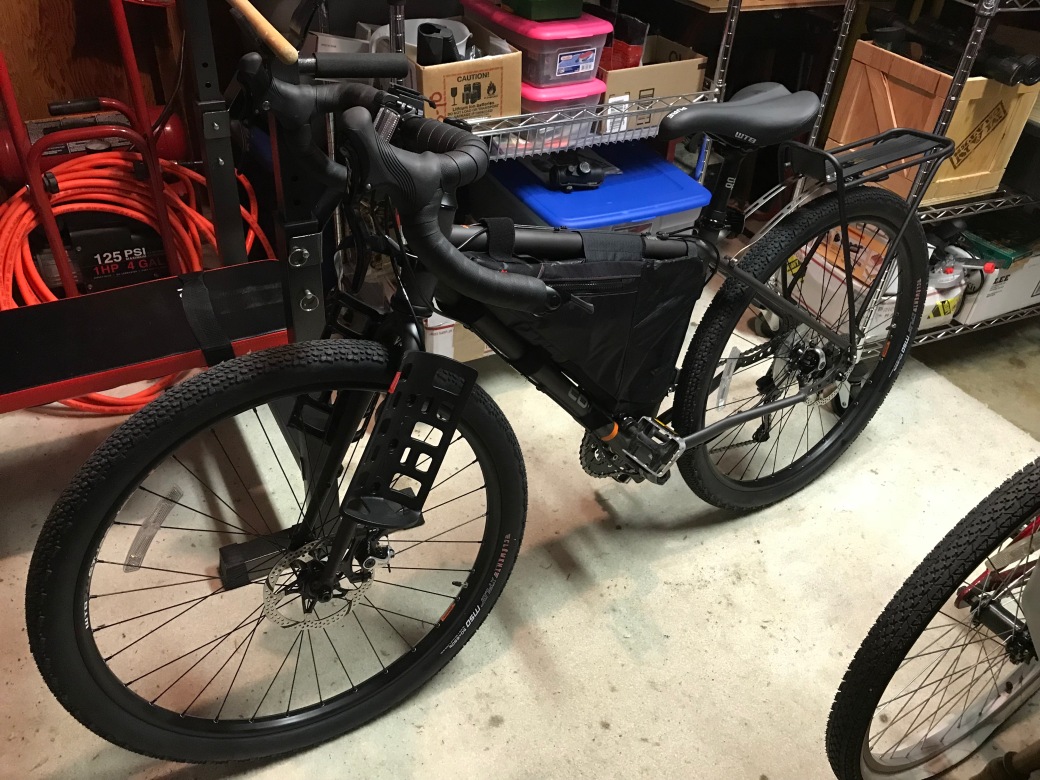 Here’s an interesting calculation that the Doc shared with me on Monday when we were talking bikes.  The measurement is called “Gear-Inches” and it tells you how big a diameter wheel your gear configuration is equivalent to when the calculations are done.  This could be fun!  The formula is (CG/FW) x WD, where CG = Crank Gear Teeth, FW = Free Wheel Teeth, and WD = Wheel Diameter (actual), which is usually 26″.  This requires some intimacy with your bike, because you have to either look up or actually count the number of teeth on each of the gears, and then make a chart of all the possible configurations of these gears and do the calculations based on the actual diameter of the bike wheel.  For example, let’s say I have 40 teeth on the crank gear I’m using and 20 teeth on the free wheel gear I’m using and my actual wheel diameter is 26″.  This configuration gives me, theoretically, a 52″ wheel to work with, which would get me a lot farther a lot faster!  Let’s do another.  Let’s say that I have a 40-tooth crank gear and a 10-tooth free wheel gear with the same actual diameter of the wheel.  This gives me a theoretical wheel diameter of 104″!  Wow, by the time that gets around one time, I’ve covered some ground!

It kind of reminds me of the penny farthing bike idea, haha!  When bikes were in their developmental stages, the penny farthing was a type of bike that had all of the pedaling and drive directly on the front wheel, which had to be huge in relation to the back wheel in order to get anywhere faster than walking.  In order to mount the penny farthing, the rider would have to get up to speed while running and launch themselves up onto the seat of the frame sitting over this huge wheel and then carefully balance and pedal like mad to keep it going!  It seems ridiculous to us now, but the bike didn’t just start out as a perfectly-engineered machine, just like jumbo jet passenger flight didn’t happen overnight.  The evolution of some of these inventions that we have today and the technology that goes into them had some rather humble and hard-won beginnings!  When the current chain-gear set-up of having the crank gears chained to a gear on the rear wheel and having “rear-wheel drive”, so to speak, came along, I’m sure there was much fuss and celebration!  An ode to the penny farthing!

Once I get these charts done, one for the smaller crank gear and one for the larger crank gear (I only have two on my ADV 3.1), I want to graph them and see where the gear-inches overlap.  It will be interesting to see how the two charts compare, and if I get tech-savvy enough, I can probably graph them so that they overlap with each other and see it directly.  If I can’t figure out how to get the computer to do it, though, analog (ie. paper-n’-pen) methods are just as good, and more fun in some respects!  Either way, I’ll be able to distinguish my low, middle, and high gear ranges on my ADV 3.1 and know the equivalent gears depending on the gears my chain happens to be on at the moment!  I think it’s a great project and right up my alley!!!  I need a good practical problem with calculations and graphing to work on!  I think my doctor knows that (wink).