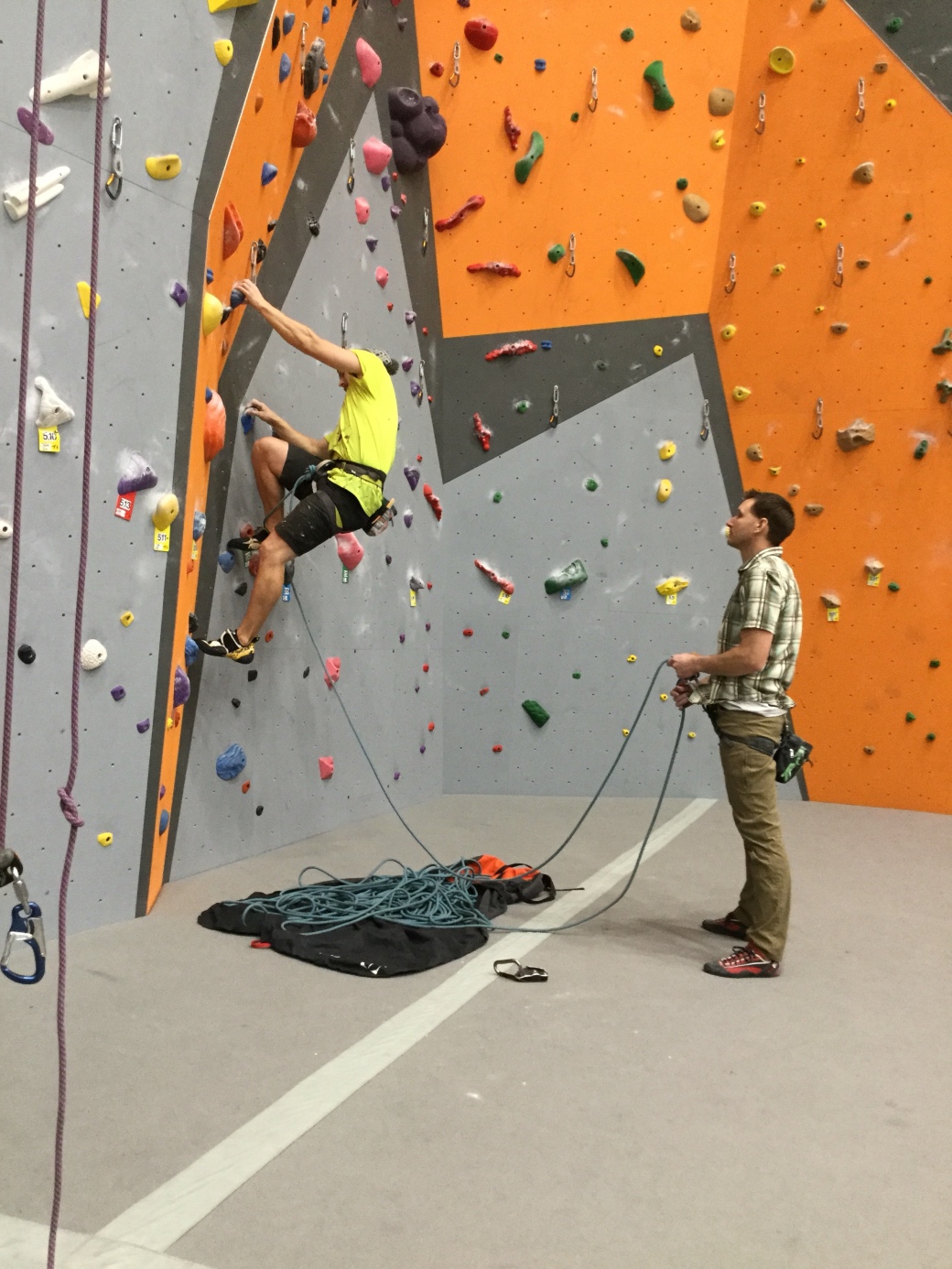 Upon picking AJ up from work yesterday, he asked if I would like to go climbing.  Well, of course!!!  I had already been to the climbing gym yesterday morning after dropping him off at work and had done my cardio for the day.  I cycled 6.37 miles in 35 minutes.  I was proud of that.  I hadn’t had time for climbing in the morning before I met my mom, though, so I was itching to go climbing.  We stopped by AJ’s place so he could get his climbing gear and off we went to the climbing gym.  His new La Sportiva Solutions were in!  He got them and he held one of the new shoes under his nose while I did the same with the other and we enjoyed that “new shoe smell”, haha!  It was fantastic!  AJ got more and more stoked the longer we climbed and he couldn’t get enough of his new Solutions.  “I stick to EVERYTHING right now!” he exclaimed later as he worked a purple 5.13b route, laughing.  I was happy for him.  He’s needed new climbing shoes for a long time.  His old Solutions are worn through at the toes, thin everywhere else, and whatever the smelly creatures that live in them are, they’re from another planet!  That’s another reason we savored the “new shoe smell”.  There’s a lot of “new shoe smell” in a pair of size 45 (M) EU climbing shoes!  AJ and I had a great time climbing last night!  I attempted Green Slopes (5.7) twice (getting fully half way up the wall on my first attempt), Purple Grapes (5.9) twice, Yellow Mumps (5.9) twice, Red Dragon Wings (5.8) once, and Skittles (5.7) once.  AJ sent a 5.11a, a 5.11d, a few 5.10’s, a few 5.9’s to set up a top rope for me, worked a 5.13b, and then sent a king line diagonally across the whole lead wall, which was fun to belay for and even more fun to watch!  That was a new belay experience for me, so I learned a lot from it, too!  After AJ had sent his king line, we called it a night.  We had been at the climbing gym since 1630 hrs and it was then 2020 hrs.  After a few stops on the way home, I dropped AJ off at his place.  I thanked my great climbing partner for climbing with me.  We agreed it had been a really good climbing session.  AJ took his new Solutions in with him as I drove slowly away.  I’m happy for him.  And we did have a great climbing session!!!  We both sorely needed that!!!