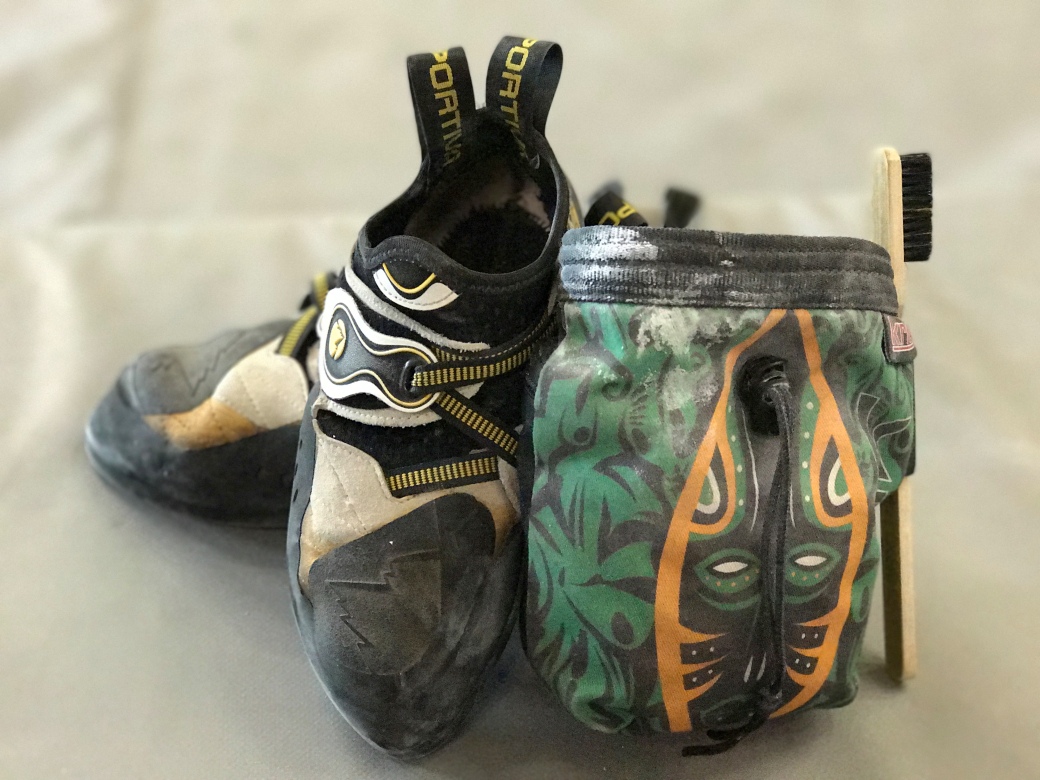 Climbing can be considered an extreme sport (especially by my mother).  It involves calculated risk and preparation.  The real thing, though, is the only experience that can tell you whether you’re cut out for it or not.  I have PTSD – Post Traumatic Stress Disorder – from my time in the military in the Middle East.  Nothing prepares you for that, either.  In a session with my psychiatrist, the man suggested climbing as a possible distress tolerance and emotion regulation tool.  It became my life that very day!  Climbing has saved my life, but how?  I have a severe and chronic case of what used to be classified as an anxiety disorder and a lot of people are too filled with fear at the mere mention of rock climbing to even consider it.  I jumped on it, though!  The reason?  I had not cared whether I lived or died for a decade and a half.  As a matter of fact, I would rather have been dead that whole time.  That’s where the PTSD and the Depression had my thinking trapped.  So, a potential way to die was a great suggestion to me!  My doctor is a brilliant man, though, because he knew that if we could find just one thing that I enjoyed, one thing that worked to make me feel better, I’d want to live again.  And he nailed it!!!

Climbing to manage PTSD?  Really?  Yes, really!!!  Both are about controlling fear.  The amygdala, the part of your brain that controls fear and anger and other strong negative emotions, becomes supersized (literally) in those with PTSD.  Other physiological changes occur, too, but I want to focus on the amygdala right now.  My amygdala is the top-ranking general when it comes to a crisis – it takes command immediately, and all the blood flow with it, starving my prefrontal cortex (the “rational thinking” part of my brain) of blood, oxygen, and all the stuff it needs to function.  Why?  The “fight-or-flight” response.  In a life-or-death situation, you don’t have time for the ho-hum, time-consuming banter of the discussion your frontal lobes have with themselves to decide whether or not to take a mental vote on a solution.  You have to act NOW!!!  So the parts of your brain that are part of the HPA-axis (that stands for a lot of technical anatomy and physiology that boils down to “fight-or-flight” response mechanism), like the amygdala, kick into high gear immediately to save your life!  Now, whether you are truly in danger of losing your life or not is a perception.  You may truly be in danger, or you may only perceive that you are in danger.  Either way, you’re reacting as if there’s a real threat.  There is also a third option to “fight-or-flight”, and that is “freeze”.  We’ll deal with that later.

Now that we’ve got the nuts and bolts of the mushy brain matter covered, let’s look at fear, the emotion, and potential responses to it.  Most people, when they’re scared, get cotton-mouth and the jitters, start sweating, experience a heightened sense of awareness, have dilated pupils to let more light in, have an elevated heart rate (if their heart isn’t just plain racing out of control and pounding through their chest), and perceive that they are in real danger.  One of three things could end up happening when the peak of this process arrives: stay and fight, run away to escape, or freeze up.  The fact is that you don’t know which of the three responses you’re going to have to danger until you encounter it.  You might like to think that you’re going to be brave and fight, or be smart and run away.  However, you might just freeze…  Whatever the reaction is, those are some of the things that can happen with fear when it’s uncontrolled.  Notice I said UNCONTROLLED.  The good news is that you can learn to control fear and change your response.  You can get those frontal lobes working and have that rational conversation, although you might not have time for the vote, in your mental space about potential solutions to your problem.  In order to do that, you have to get your amygdala to release the iron grip on the blood and oxygen supply to your prefrontal cortex (yes, those big, fancy words again).  I’m almost done with the technical language, don’t worry.

As my doctor said the other day, “If you don’t have fear, you shouldn’t be climbing!”  True statement.  I’m going to be talking about controlled fear, NOT lack of fear.  Lack of fear altogether is a bad sign, especially when you’re doing something dangerous, like climbing.  You need a little bit of fear to keep you alert to your safety protocols and what you’re doing – a boost to your common sense (I pray that you have some of that), in other words.  Controlled fear allows your rational thinking to continue while you do something dangerous, or perceived as dangerous.  Here’s where climbing comes in to save the day with managing my PTSD.  Controlling fear, like building confidence, generalizes.  If I learn to control fear in this dangerous situation, then I can control fear in that other dangerous (or perceived-to-be dangerous) situation.  If I can be confident climbing, then I can be more confident in handling and managing my PTSD symptoms.  Climbing, I have found, takes care of a lot of PTSD symptomology for me.  Climbing forces me to control my fear, and in controlling my fear, I have to override that hyperactive amygdala that causes so much of the trouble in PTSD.  Climbing takes FOCUS.

Here’s the deal: I can’t focus on the task at hand AND fear at the same time while I’m climbing.  I have to control the fear enough so that I can focus on the PRESENT – what’s right in front of me, like the next move or the next hold – and not the last ten moves or the next ten moves.  I have to focus and be in the present moment in order to climb well.  That pushes all of that negative stuff – the fear, the worry, the positive or negative results of my last climb or PTSD or whatever other problems I may be having in life – out of the way completely.  I have to focus on the here and now.  I can’t focus on the fear.  I have to focus on the next hold and climb.  The combination of motor function and intense, complete focus on the present moment put fear and everything else away in a controlled manner.  You have so many other things to focus on in the present moment and you have to keep making that next move, one at a time, until you finish the climb.  It forces control.  Once you’ve finished the climb, you can be as jittery and overwhelmed with fear as you like, but while you’re actually climbing, you have to be right there, in the moment, and moving, one hold at a time, up the wall.  There are a lot of things you have to control and let go of, including fear.  Fear keeps you on the wall, but it no longer stops you from focusing and moving.  If something unexpected happens on the wall while you’re climbing, you have to work through it.  You have no choice.  You have to put the fear away.  Control the fear.  And when you get to the top of your climb, you’re going to feel elation, not fear or panic.  You’re going to be psyched out of your mind at what you just accomplished and you’re going to collapse in a heap of exhaustion and celebration, every breath a welcome gift and a well-earned one.  Here’s the kicker.  You’re going to want to do it AGAIN!

Why would you want to go through all of that torment again?  Because you were able to control it and conquer the fear that’s been holding you back.  Because it gave you confidence in abilities you didn’t know you had.  Because it felt so incredibly good.  You now have a fear addiction.  Congratulations!!!  Truly, though, the sense of accomplishment after such an intense mental and physical struggle is due to the release of endorphins – the natural chemicals in your brain that make you feel good – and you’re going to want more of that feeling.  So, now, instead of dreading fear, you now embrace the control of that fear in order to get the reward of the “natural high” that you’re going to gain from those feel-good chemicals in your system after doing something that forces you into that situation, such as climbing.  Now that you have more confidence in climbing and experience the release of the endorphins and positive feelings more often, the symptoms of PTSD are more manageable.  In short, when I feel the PTSD getting out of control, I go climbing and I’m able to reign it in a lot better, with the added benefit of physical exercise!

Now, to go even further, I practice managing PTSD even when I’m not feeling particularly vulnerable to it by going climbing regularly so that I have an established level of control over fear and other negative feelings more of the time than not.  This makes climbing both a go-to for mental health emergencies and a feel-good exercise that benefits me even when I’m not in crisis.  Climbing actually helps me prevent PTSD crises and is good for my body, mind, and spirit.  It’s established in my system as both a distress tolerance tool and an emotion regulation tool.  And, by golly, I just outright love climbing, too!!!  I live to climb and climb to live.  It has truly saved my life!!!

I try to keep the content of my posts in the PG range (meaning that maybe your 13-year-old should not read it... Just kidding!) - you know, something I could get away with tastefully in the town square without getting lynched, tarred-and-feathered, or hung (and something my mother would NOT wash my mouth out with soap for). As far as what age you have to be to understand some of the subtleties of my humor in writing and/or speaking, well... That may vary. A lot.
Loading Comments...
Comment
×
%d bloggers like this: