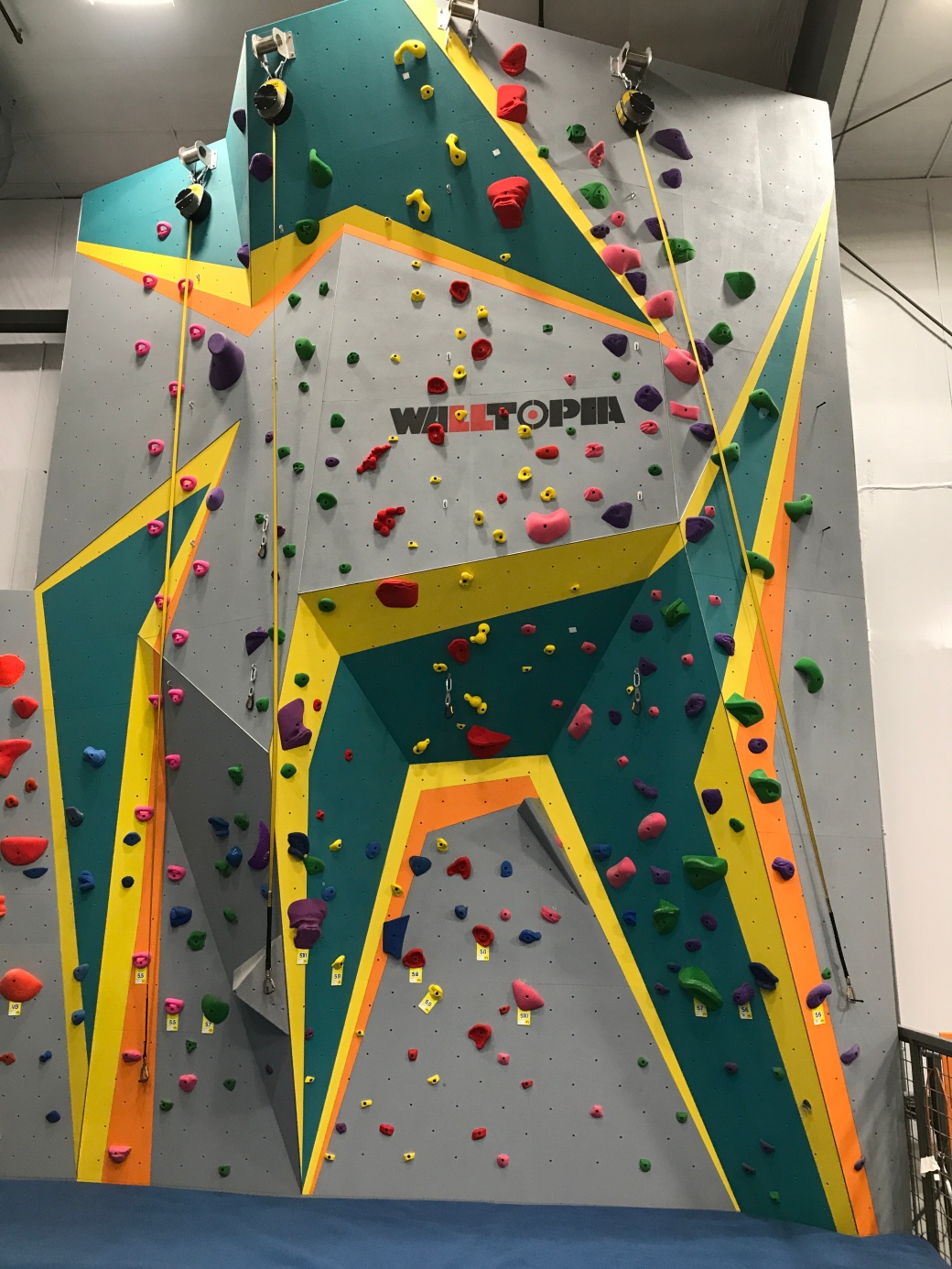 First, my apologies for not posting on my blog yesterday!  I was route setting at the new climbing gym with AJ and was so beat by the end of the day that I just kind of fell into bed…  That aside, I have a tale to tell!

Route setting on ropes is entirely different from setting from a ladder or setting a boulder problem.  In AJ’s words, “You put everything you know together and use it to set a route.”  We were working on the rope routes in Boulderland, so they weren’t 40′ high, at least.  This was my fledgling attempt at setting on ropes, and setting a rope route.  AJ set up a rope that was well-knotted and clipped to the former auto-belay mount (which is now a toprope mount) with a carabiner that hung down and gave me plenty of spare feet before the knot at the other end would be reached.  In this case, I was setting in the middle of the wall, so I had little chance of swinging over the railing, but that knot at the foot end of the rope would stop me from falling, should that situation arise.  AJ had brought up a whole bunch of bags of brand new red holds for me to work with to set this 5.8 route.  I was so excited!!!  I began planning out my route by placing holds on the now-finished padded landing area.  We laid some padded blankets down below where we would be working so that we didn’t mess up the floor if we dropped something.  This was our “drop area”.  I found the holds I wanted to start with and began putting them on the wall.

I had already put my Misty Mountain harness on and had two Personal Anchor Systems (PAS’s) and my GriGri on my harness, plus an extra locking carabiner, should I need it for anything (always have an extra locking carabiner, I’ve learned).  AJ had already instructed me to feed the rope through my GriGri just like I would on toprope.  Okay.  Did it.  Fed it through properly, and had AJ check it.  He had clipped the rope into the one perma-draw that was placed in the lower overhanging section of the wall for me already.  I then realized that this could be very difficult.  Not only was I climbing near my limit, but I would have to do so in my street shoes.  If I used my climbing shoes, I would not be able to reposition my feet without marking up all of the holds with rubber from my shoes.  So…  At least I had chosen my Scarpa Rapid LT shoes.  They fit well and are comfortable.  The footholds were small for street shoes, though.  I had a hell of a time (rated-PG version, trust me) getting up those holds in my tennis shoes!!!  I managed to get to a position where I could take up the rope with my free hand, but my free hand was my left hand, which I wasn’t used to taking rope with.  As I was taking up the rope, and had just tightened it, my right hand slipped off of the volume I was gripping and I ended up inverted, right in front of Scott, one of the owners, who simply remarked, “Chris?”  I quickly righted myself and then, as Scott remarked while in the presence of everyone eating chili in the yoga room last night, “Lowered [myself] so gracefully.”  I told him it was my signature move and he laughed.  I was glad he has a good sense of humor. Well, that was out of the way, at least!  I had tested my Misty Mountain harness on the inversion and it was rock solid!

AJ was working on another route and saw me laying flat on the floor, sprawled out and laughing at the end of the rope.  “What happened?  Did you let yourself down a little too fast?” he asked, while laughing, too.  I told him what had happened and he said, “Well, at least you got it out of the way.”  I was having so much trouble climbing in my street shoes.  AJ coached as I tried again and again, getting ever more tired and frustrated with myself.  I decided to take a break and took myself off belay.  “That’s the best thing to do when you’re frustrated.”  I told him I felt like crying.  “Don’t do that.  Take a break.  Go get some water.”  I went down to the drinking fountain and drank a bit.  I stood there for a minute, then drank a bit more.  I marched back up the steps to the wall and fed the rope through my GriGri.  AJ coached me up the wall far enough that I had to trust the GriGri after I had taken up the slack in the rope and sit back in my harness.  I had the T-wrench in my pocket.  I carefully, with AJ’s patient instruction, got myself close enough to the wall and stable enough on two footholds (though not solid) to tighten the bolt on the hold I was trying to put up next.  It was very difficult.  I felt a flash pump growing as I held myself close enough to the wall with my left hand on a hold while screwing in the bolt with the T-wrench in my right hand.  I got the bolt tightened and couldn’t hold on any longer.  My left hand slipped off the hold.  I didn’t swing far because I had my feet toeing in on two holds, but I had to get myself back to the wall with my hands again.  I had managed to put the T-wrench back in my pocket and was holding the rope with both hands.  “You’re white-knuckling it,” AJ said as he rubbed both his eyes with one hand and smiled.  Yes.  I was white-knuckling it a mere four feet off the floor.  “You just don’t trust it yet.  It takes some getting used to.”  I told AJ he might have to set the rest of that route.  “Okay.  Setting on ropes isn’t for everybody.”  I told him I wanted to learn to do this so badly, and that I would learn to do it.  “So, you’re saying, ‘Be gentle, this is my first time?'”  NO!  We both laughed.  I kept trying for the rest of the day, until finally, I asked AJ to finish it in return for pizza and a 2-liter.  He, of course, made it look easy.  I was determined to lose weight by getting back on my diet, and even more determined to get in better shape – the best shape of my life – so that I can climb at my full potential, which I gauge to be quite extensive!!!  I WILL be able to set on ropes!!!  And MUCH, MUCH MORE!!!

So, in the photo above, you can see the red 5.8 route going up through the middle section of the wall.  I designed it to have two cruxes, and it will be a toprope route.  I am more determined than ever to CLIMB MY HARDEST!!!  I will be one of the best route setters ever, too!!!