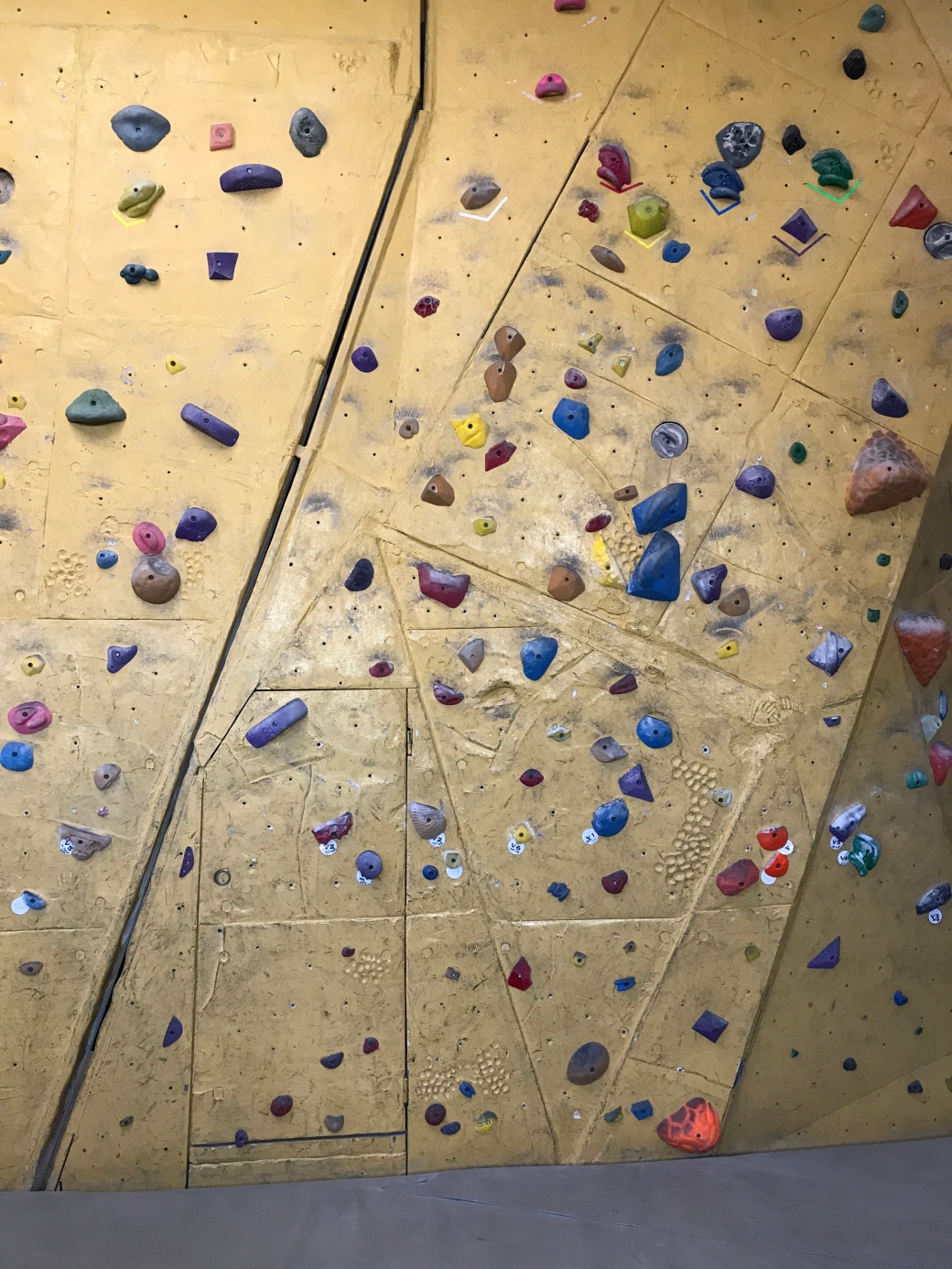 I began warming up at the climbing gym yesterday coming off of two days of illness from food poisoning.  I was supposed to meet Mack, who is training me, but I told him I was just going to focus on climbing yesterday because I still wasn’t 100%.  The first thing I did was traverse on the warm-up wall.  I traversed across and back, all in one go.  That surprised me.  I had the strength to do that!  The next thing I did was attempt the black V1+ that I had sent last week.  I got halfway up and downclimbed the wall, not out of fatigue, but because I was being overcautious of that overhang.  I didn’t yet know how much strength I had in me or how I was truly feeling yet.  So far, so good, but I didn’t want to push it.  I looked at the orange V0 that I’d been unable to do last week.  It had a high step in it that I had fallen far short of when I’d tried it then.  I played around with the first couple of holds and then just decided to see what I could do with it.  I began climbing.  First dynamic move, right hand.  I brought my foot up – all the way up – to the next foothold!  I did it!  Okay, now it was game on.  I had to make another dynamic move with my left hand.  Got it.  Now to bring my right foot way up, and I did it!  I stood up and finished the problem on the bar!!!  Second problem I’ve ever finished on the bar!!!  McKenzie walked into the gym just as I was letting go of the bar to downclimb.  “Did you just climb that?” she asked excitedly.  Yes!  I just sent that!

I had been watching a man working on a red V2 over on the tower wall.  I had been unable to even grip the second hold of that problem two weeks ago and never revisited it.  I decided to try it.  I got halfway up the problem, then downclimbed because, again, a bit of the unknown overwhelmed my sense of adventure temporarily…but only temporarily.  I tried it again and got to the same spot with different beta – better beta.  The man that had been climbing it earlier was nearby, so I asked him how it was.  “Oh, the red one?  That V2?  It’s good.  You’ve got some good holds here and here and there,” he said, pointing vaguely into space as not to give the beta away.  I appreciated that because I really wanted to figure this one out using visualization so that I could practice that, too.  The man and his son walked around the arete and out of sight.  I attempted the problem again and got within two handholds of the finish hold.  Again, I downclimbed, unsure of the risk of reaching for the hold far to my left that would adjust my balance so that I could finish the problem.  This V2 was all about balance and footwork.  That, and being able to grip V2-level holds, which I could now do.  My confidence grew with each attempt, and I climbed more of the route with each attempt.  I went out to the desk and told McKenzie what I was working on and that I thought that my first V2 was very close.  I sat down at the table and thought about calling it a day.  I also had the nagging thought that I could send that V2 yet, and that I should because I had been projecting on it with such steady gains.  I sat there, pondering the V2.  Finally, I got up and took my chalk bag over to the bench nearest that wall with me.  I chalked up.  This was it.  I was going to try it one more time.  I didn’t hesitate.  I put my hands on the start hold, got my feet on the wall, and began climbing.  Balance.  Footwork.  Momentum.  Upward I climbed, negotiating the holds carefully, yet confidently.  I got to the point where I had stopped on my last attempt.  This was not a dynamic move.  It was a very controlled move.  Very steadily, I moved my left hand out to the hold that seemed so far away.  I reached it and took hold of it.  It was a great hold!  So much better than I had expected!!!  I adjusted my feet and prepared to move my right hand up to the second-to-last hold.  This was a steady process, too.  Now, the finish hold.  It required good balance, a solid stance, and leaning to the right.  I got my right foot up another hold and then reached over with my left hand…slowly…steadily…  I gripped the finish hold with my left hand and carefully moved my right hand up to touch and hold the finish hold at the bottom with my right hand.  I had done it!!!  I had sent my first V2!!!  I downclimbed carefully and, once on the floor again, I yelled, “McKenzie, I sent it!!!  I sent it!!!”  McKenzie came into the gym as I told her, “I sent it!!!  I sent the red V2!!!  I sent my first V2!!!”  She gave me a double high-five.  I felt so incredible!!!  I had been in the moment – that pure movement had taken over and I had been in the moment for that entire sequence of moves on that final attempt.  That is the best feeling in the world!  The world around you stops.  You hear your breathing.  You see the particles of dust floating in the air and stuck to your hands.  You feel your fingertips grip the texture of the holds and your balance so accurately shifting, ever so slightly – every bit of it.  Your mind is at the pinnacle of its stimulation and your focus has that razor-sharp intensity that only comes when this all-or-none moment has come.  And then you finish it.  The downclimb has an intensity of focus to it, too, but it’s more of an uncontrolled sub-panic state that your body enters into that gets you down safely again, one hold at a time.  That overwhelming sense of accomplishment hits a few seconds after you get back to the floor and you just let a primal roar of victory go in your mind as the chemicals all rush into your system and time is restored to your world.  Your perception is heightened and you feel that natural high of the neurotransmitters pulsing through your body, racing with the blood through your veins.  You sent it!!!  You sent your project!!!  I sent my first V2!!!

I allowed myself to enjoy the high for a bit, and then decided to end my climbing session on that note.  I texted Mack, my trainer.  I messaged AJ.  I texted Emily.  I was experiencing pure joy!!!  I walked out of the gym after having packed up and re-entered the “normal” world at dinner with my husband and two others.  I told them that I’d sent my first V2.  They barely responded with blank looks and went on about their conversation without me.  That didn’t steal my joy, though.  I was basking in that as long as I could!!!  I was so psyched!!!